Please enter a single keyword or a product code.

A range of award winning data loggers, starting with Vu+ for Primary to V-Log in secondary education and universities.

Spare parts and data logging accessories to compliment your teaching and learning!

All the benefits of the EasySense Software working with Dynamics.

Spare parts and accessories for the Dynamics systems.

Learn more about using the Data Harvest products in the Primary & Secondary Academies.

Choose from a range of 3rd party products that compliment data logging and enhance your classroom science experience.

If you are expierencing any product problems contact our free support here:

Download product manuals & firmware updates from the product specific pages, use the button below for legacy products.

Our latest eNews and special offers can be found here:

Workshops and exhibitions, find out where Data Harvest will be next: 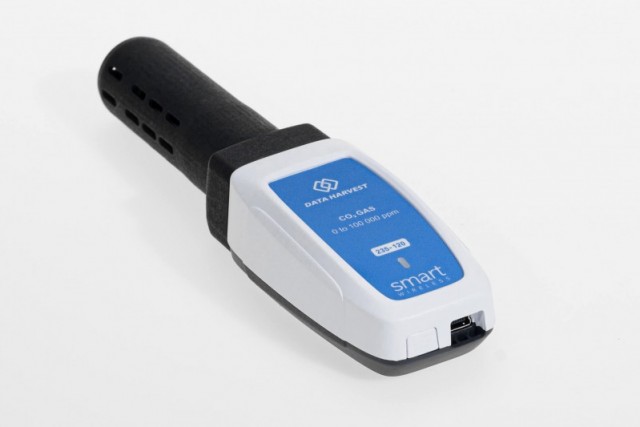 As well as being implicated in global warming and generic pollution Carbon dioxide is an important gas for the regulation of breathing. It's and odd piece of physiology that considering our dependence upon oxygen for life we have no real oxygen detection mechanism in our body. Instead we use indirect carbon dioxide measurement to work out if we are getting enough oxygen.

While it is known that carbon dioxide will create a bad atmosphere, most sensor technology centres around carbon monoxide. Carbon monoxide is deadly, it is not a natural environment gas and we have not evolved the ability to detect it, hence it is known as the silent killer.

Carbon dioxide is a natural environment gas and we can detect changes and react to them. The level of carbon dioxide is very low in the atmosphere but that does not tell us the truth about how it reacts and the damage it can do. The low value of carbon dioxide in the air and the small differences that create change means we measure it in a very low level unit ppm (parts per million). 1 ppm is equal to 0.0001%. Until recently atmospheric carbon dioxide levels were at 300pp or 0.003%.

The data Harvest Carbon Dioxide sensor can measure over the range 0 to 100,000 with a 1ppm resolution. The sensor can also measure temperature, humidity and pressure at the same time. It is an ideal sensor for monitoring the room atmosphere.

The wireless connectivity to any device (android, iOS, chrome) also means you can quickly link to the sensor and take “spot” readings.

We have conducted our own practical over the course of a working day to investigate how carbon dioxide levels change dynamically, it also (in our case) showed how stubborn they were to change. Even full window opening and forced ventilation by fans only halved the recorded levels.

Download our free worksheet here and use the Smart Wireless Carbon Dioxide Sensor with the following possible activities.